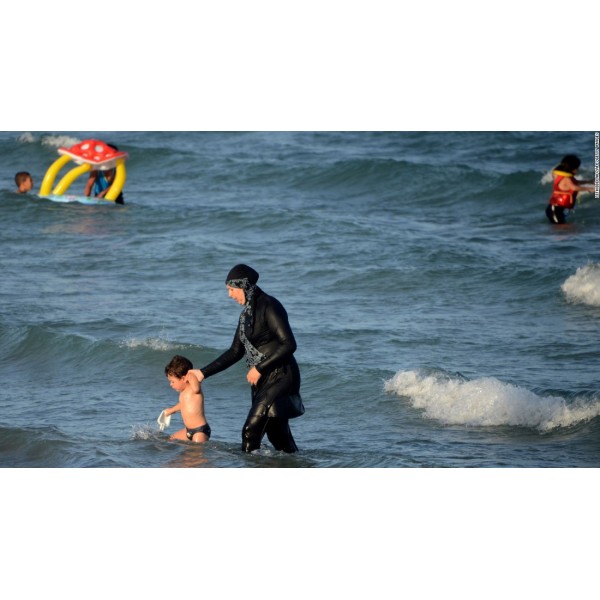 It was the burning issue of the French summer — should burkinis be allowed on beaches?

Yes, said the country’s highest administrative court on Friday, ruling that mayors do not have the right to ban burkinis.

The ruling follows the case of 15 French towns banning the burkini, a full-length swimsuit that covers the whole body except for the face, hands and feet. At the time, officials said the ban on the outfit — worn mostly by Muslim women — was a response to growing terror concerns.

But when pictures emerged of French police apparently ordering a woman to remove part of her clothing on a beach in Nice on Wednesday, it divided opinion around the globe.

From nuns frolicking on the beach to motorcyclists lounging in full gear, the Internet served up its own answer to France’s burkini ban this week.

As the ban targets overtly religious clothing, many Twitter users wondered if nuns in habits would also be affected.

They posted images of carefree nuns frolicking at the beach, in an effort to highlight what they feel is the ban’s hypocrisy.

Meanwhile, images of motorcyclists lounging on the beach in protective gear have given rise to the hashtag #motorkini.

Artists across the globe also turned their hands to the controversy.

Sudanese designer Khalid Albaih depicted a woman being ordered to undress in France, and uncover in other parts of the world.

The Bangkok-based political cartoonist known as “Stephff” questioned the meaning of liberty in France today.

And French illustrator La Sauvage Jaune showed the various expectations placed on women, depending on which part of the world they’re in.

Londoners build their own beach

In London, demonstrators created a makeshift beach outside the French embassy for a “Wear what you want beach party” on Thursday.

Dressed in everything from bikinis to burkinis, and even priest’s cloaks, the activists gathered in solidarity with Muslim women in France.

“I think it’s ridiculous,” event organizer Fariah Syed said of the burkini ban. “No one, regardless of their religion and race, should be told what they should wear and where they can wear it.”

So what’s the view from France?

And much like the recent burkini bans, opinion in the country is divided between those who see the laws as an infringement on religious freedom, and those who view the Islamic dress as inconsistent with France’s rigorously enforced secularism.

Hervé Lavisse, president of the Cannes-Grasse section of the Human Rights League, told CNN the bans would be counterproductive because “instead of appeasing people, it will inflame tensions.”

While French Prime Minister Manuel Valls defended the bans, on Thursday calling the burkini a “symbol of the enslavement of women.”